This article was also posted at www.californiabeerandpizza.com

It doesn’t really get that cold in Orange County. Despite the mild holiday weather, we still like to celebrate the changing of the seasons with traditional community events, which is why it’s surprising that OC doesn’t really have many holiday beer events. OC Brew Ho Ho took advantage of this opening and thus began the OC Brew Ho Ho’s Annual Holiday Beer Festival. This was the inaugural event, which of course means there will be some organizing kinks to work out for future events, but overall it was a very enjoyable event. 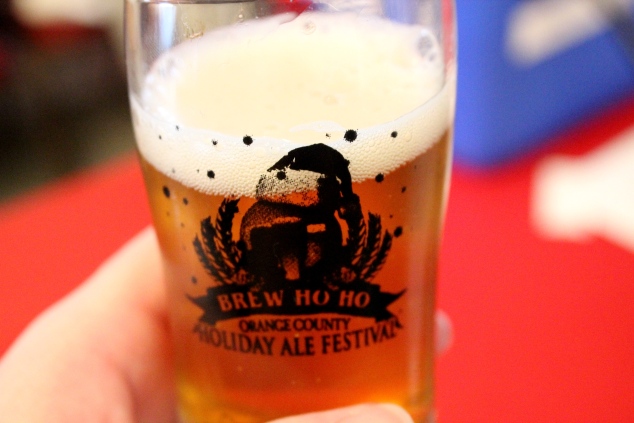 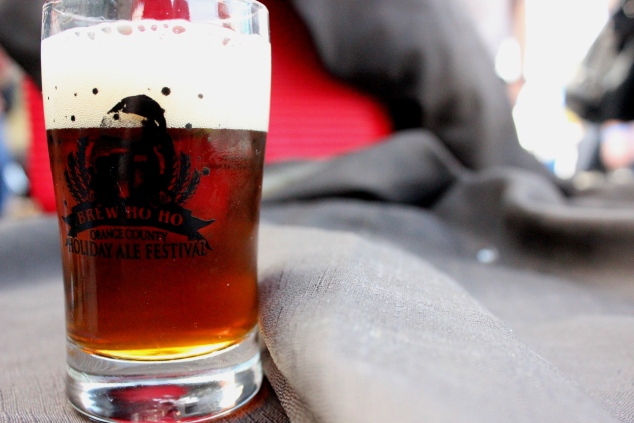 –          Outdoors and Indoors : It was surprisingly hot and sweaty in the inside “tented” area, especially when the sun hit in the afternoon. It was nice to have the option to pop-in and pop-out as I pleased and still have nice beer options outside to taste. It helped that the weather was an awesome 65 degrees all day. 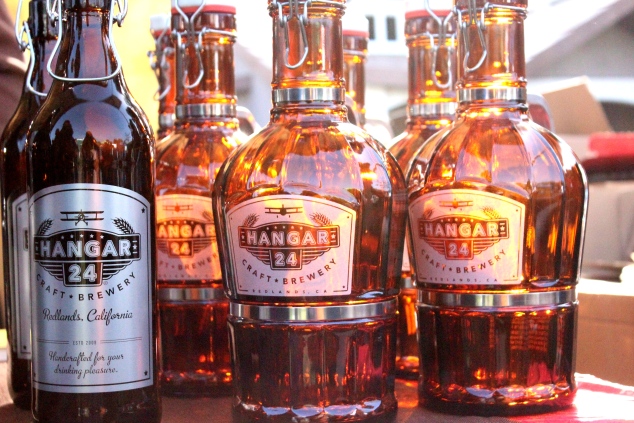 –          Great beer list: Let’s be honest, it’s not often you get to have Hangar 24’s Pugachev’s Cobra, Stone Brewing Co.’s 12.12.12, Tustin Brewing Co.’s Bourbon O.E., etc. at the same event. Perhaps because these are harder to find, high ABV beers that aren’t typically provided for mass tasting events. Either way, it’s much appreciated. My favorite beer of the event is a tie between Cobra and Noble Ale Works: Excuse Me, There is Schmutz in My Coffee.  I have had Cobra before, but it’s just a damn good boozy well-done beer. It’s not overly sweet which is typical for a 16.8% bomb like this. The Noble beer was a sleeper-hit. I had the “You’ll shoot your eye out” first and it was ok, but the Excuse Me beer was exceptional. It smelled like sweet nutty coffee and finished sweet and dry and boozy but wasn’t overly bitter like typical coffee beers. Really well done. 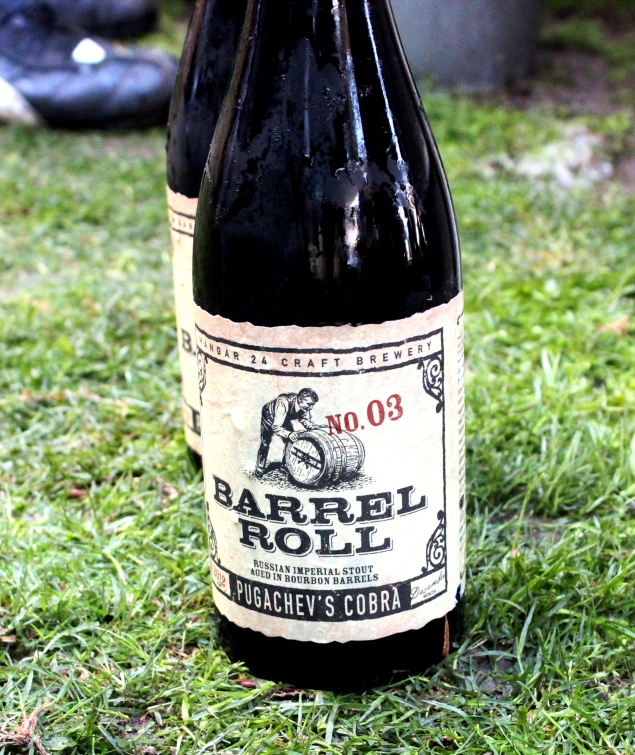 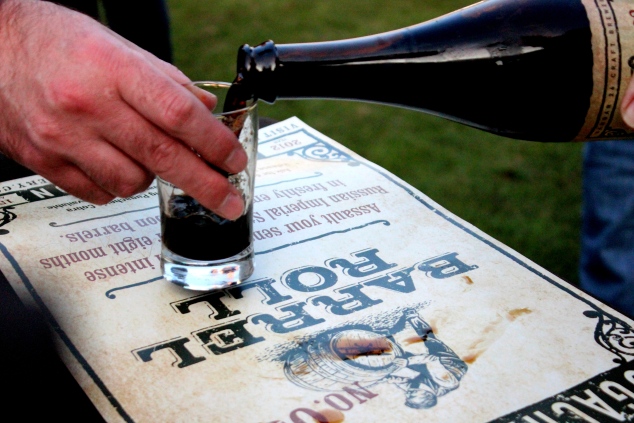 –          Wonderful Atmosphere and People: The air was full of joy and holiday cheer. I am sure the amount of alcohol was helping but hey, I took advantage of the happy spirit and immersed myself in the beer culture. I ran into some beer friends unexpectedly, which is always soul-warming. 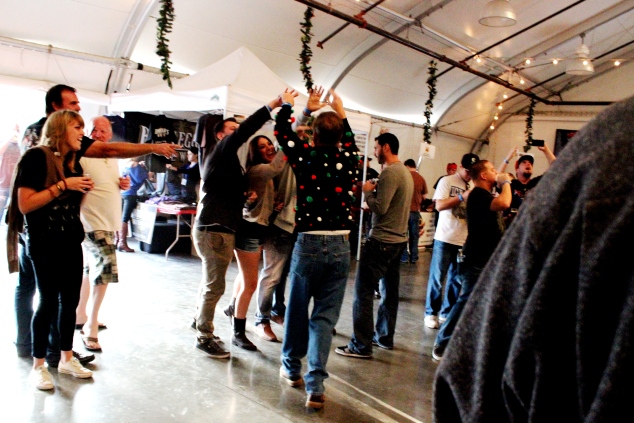 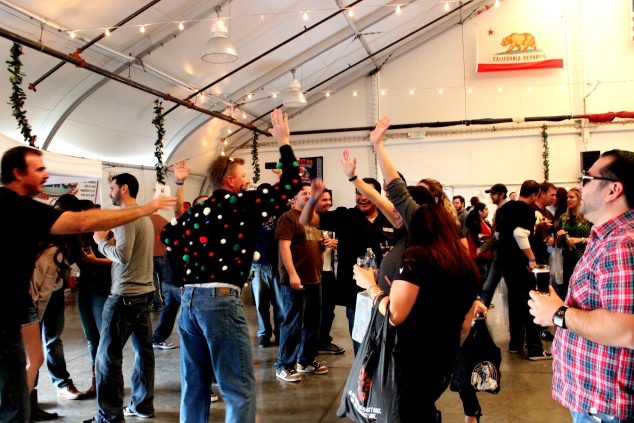 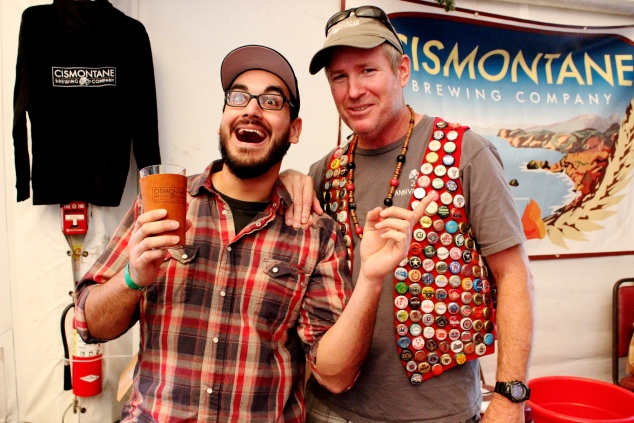 The only line of the day….Cobra!!!

–          No Lines: I arrived to the event and there was basically no wait to get in. Most of the beer stands you could walk-up to and if there was a line it went very fast. The only exception was the Cobra release line…but that’s to be expected. 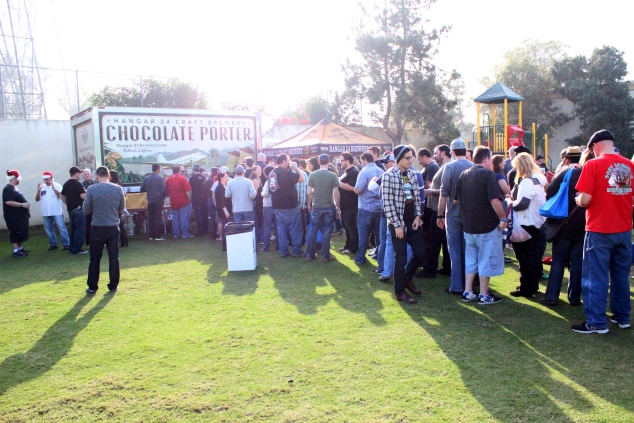 The only line of the day…Cobra!!

–          Food Trucks: If you read this blog you know I am a fan of Viking truck and I know I wasn’t the only one happy to see them there. Heaven on earth is a corndog in one hand and a fantastic beer in the other.

–          No tasting tickets/wristband tabs: I am going to say this is also a con below but it was pleasant not to have to have my wrist violated of its tasting tabs every two seconds. Also, tickets are a hassle especially if you have no pockets, so no tickets was cherished.

–          No signs for the entrance: The last time I was at The Phoenix club the entrance was in the back grassy area behind the parking lot but this year that was a vendor-only area and the entrance was all the way around the building. Some signs with arrows would have been helpful. It would have been fun to follow the arrows like I was Jennifer Connelly in Labyrinth so much that I wouldn’t have minded if it changed on me because of security guard gremlins.

–          Inconsistent entrance rules: The people in front of us had pretzel necklaces and were told they couldn’t enter with them on but I saw a bunch of people who had them on. They even said, “You can’t have them, but you may see some people in there with them on and that’s because they were let in when I wasn’t here.” Make rules and stick to them or you risk being a dick.

–          No limit to tasters: Ok, before you scoff at me let me explain. It’s insane to have a high ABV unlimited tasting event. You don’t really need any more than 15 2-4oz tasters in a 4 hour period. I think I had maybe 10 total. You will always have that guy who has way too much because he can and get sloppy and trashed. I saw falls, breakdancing because of a fall, more falls, crying, underwear, and more things that while hilarious were probably due to noobs who can’t handle their alcohol limits. 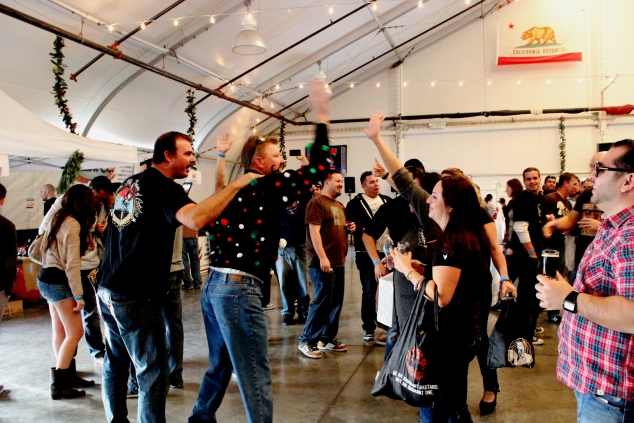 This guy was verry happy that he had a marker mustache.

These cons are merely peanuts in comparison to the weight of the pros in its girth. These are more like suggestions for next year. Overall the people who run the OC Brew Ha Ha and OC Brew Ho Ho events are doing great and really know how to throw a good event for a wonderful cause. The proceeds for this event went to benefit the Pediatric Cancer Research Foundation who is dedicated to improving the care and quality of life for children with malignant diseases and Yellow Ribbon America-Operation Christmas. The Yellow Ribbon America-Operation Christmas is an organization dedicated to helping communities and their local military families have the best Christmas they can give them by accepting unwrapped toys at the event. Not only are you having a great time tasting seasonal holiday craft beer, but you are donating to a superb cause. Keep up the good work and I can’t wait for the next event! 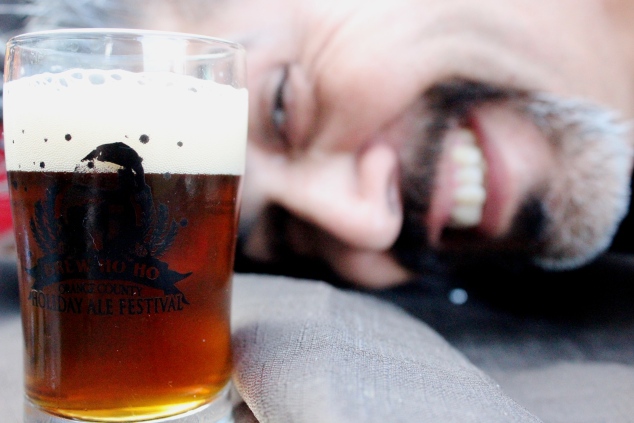 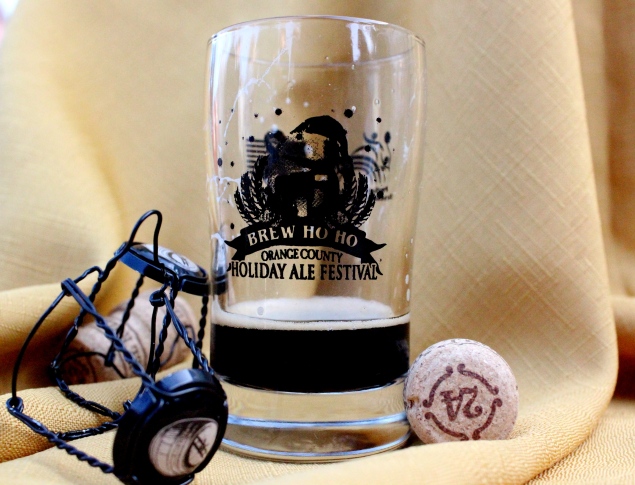 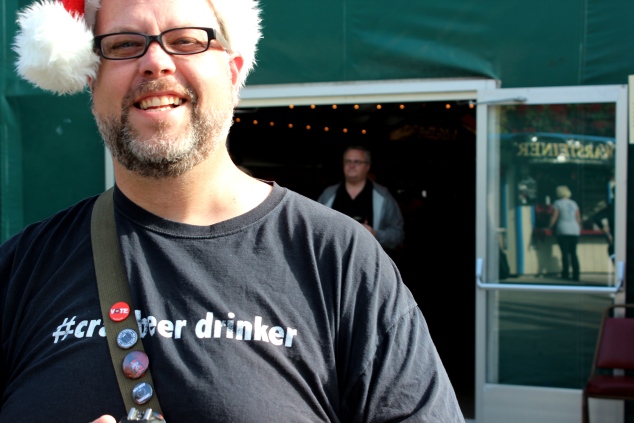 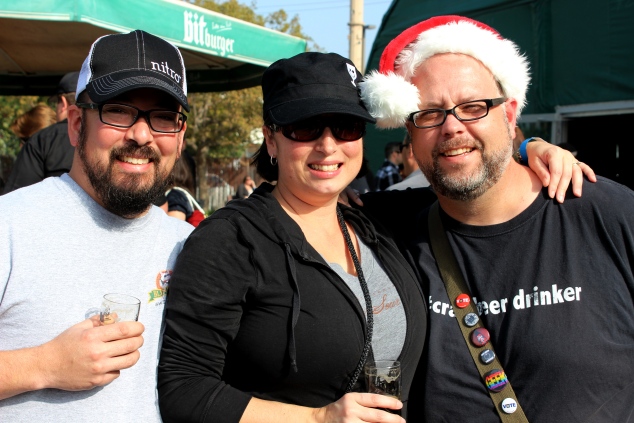 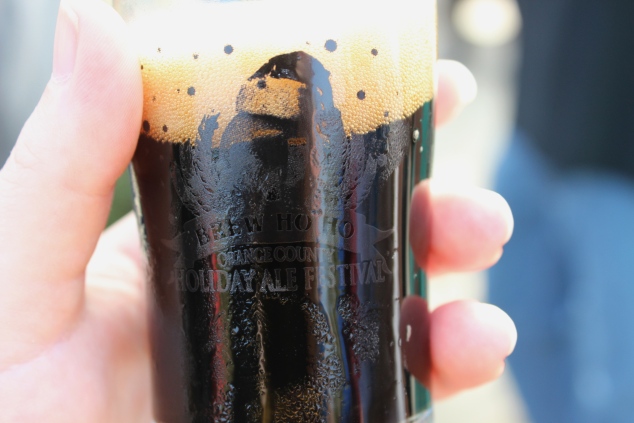 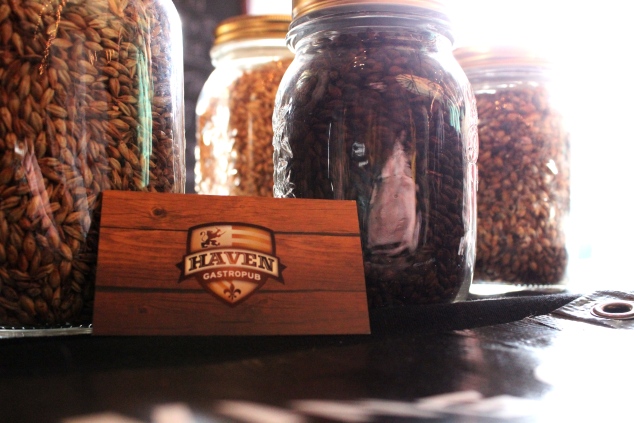 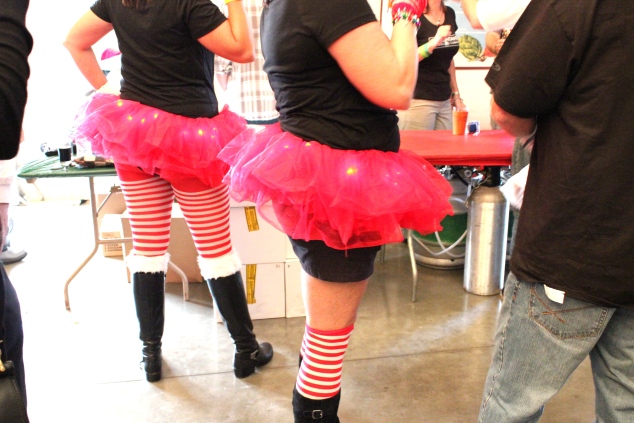 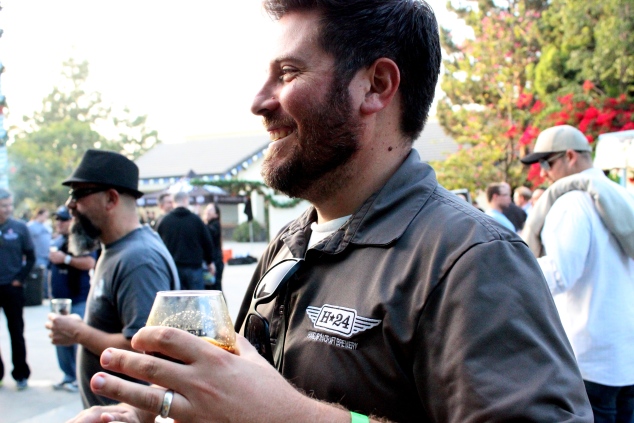 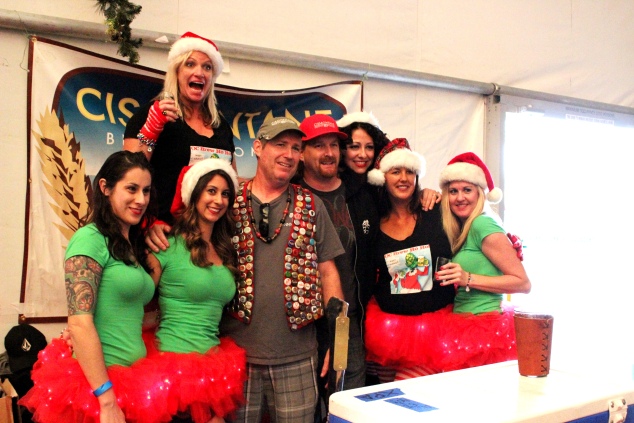 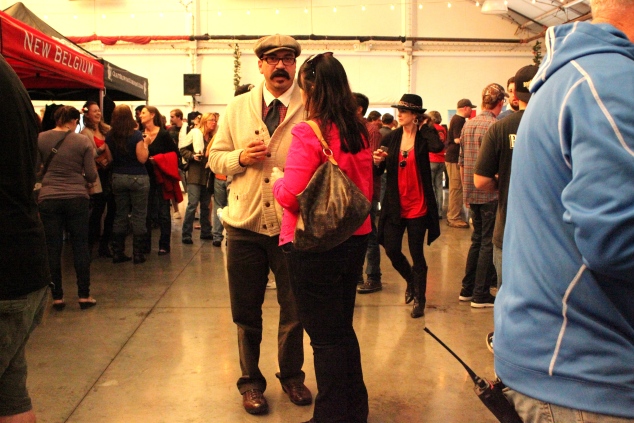 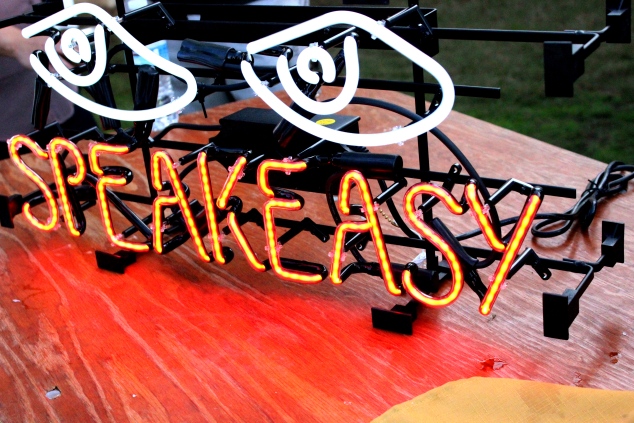 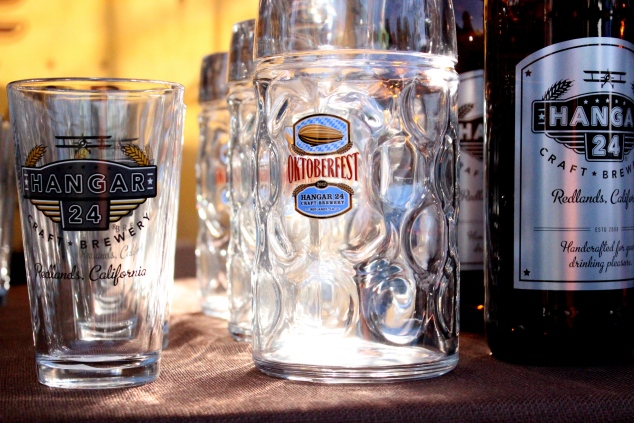 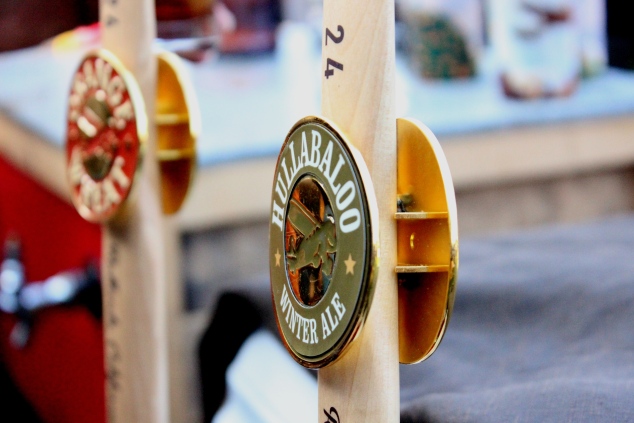